I hope everyone had a great Christmas, the run up to which saw any real chance to proceed with this project come to a grinding halt!
I did receive the Eureka Powhatan from Fighting 15's a couple of weeks back, but unfortunately, whilst they are excellently sculpted miniatures, generally they do not fit in well with the Conquest, or even larger Galloping Major. The latter are probably the nearest to the standard heroic 28mm we see from the likes of Artizan, the major problem being that I will have to get the Green Stuff out and convert quite a few (not a major problem as I was expecting this to be the case from day one). The Conquest figures are similar height wise but slimmer, I think I'll probably get away with using them with the Galloping Major ones, possibly as adolescent warriors. Some of the Eureka could also be used as such but they are noticeably shorter and slimmer than the Galloping Major ones. 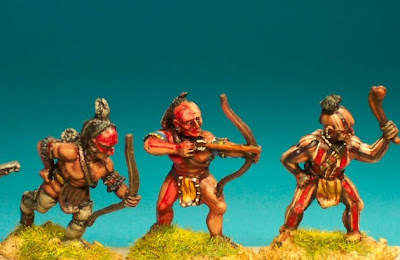 (photo Front Rank Figurines IND11 to 13 Woodland Indians)
Consequently I have been on the hunt again for Algonquin and came across the Front Rank Figurines range that I understand are compatible with the Galloping Major figures. Again most are armed with muskets, but there are a handful without and I can convert some of those with. An order will be sent out in the New Year...
Posted by Steve at 12:05 No comments:

Whilst my Galloping Major Algonquin have turned up, I'm still waiting on the Eureka ones so will hold off doing a review until the Royal Mail decides to deliver them. In the meantime I thought I'd bring a free set of rules and supporting blog to your attention. 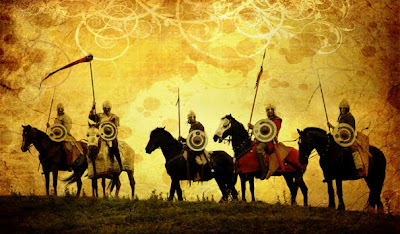 Although Brytenwalda is an 'Age of Arthur' dark ages set, it is the kind of warband style game I'd like to do with New Worlde. I haven't managed to do anything much than download them and browse the blog, but they look interesting and might well encourage me to dig out the old Foundry Arthurian miniatures I bought many moons ago.
Posted by Steve at 07:59 No comments:

Email ThisBlogThis!Share to TwitterShare to FacebookShare to Pinterest
Labels: Rules

Thanks to Kolbold for pointing me in the direction of Eureka's Powhatan (an Algonquin tribe). An order has gone off to Fighting 15's for the ten figures (which include a useful shaman). 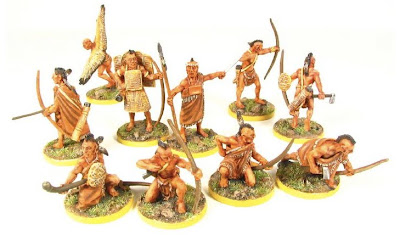 (photo Eureka Miniatures 100 POW01/03 Powhatan Raiding Party)
Last night I also came across Galloping Major Wargames who do some lovely FIW figures including a useful looking Huron command pack which look like the muskets can be easily replaced by spears and hand weapons.

(photo Galloping Major Wargames FIW HUR3 Huron Command & Characters)
I also found Old Glory US do a great pack of thirty 'Natives with bows' in their FIW range, although I can't find them on the Old Glory UK website so have emailed them to ascertain their availability in the old country...
Posted by Steve at 16:28 No comments:

One of the problems when I first looked at New Worlde as a project was the availability of pre-gunpowder woodland indians. Whilst I wasn't going to worry about a specific tribal appearance, figures carrying C18th muskets weren't going to be of much use. Unfortunately most of the miniatures available seem to be for the French-Indian Wars and sporting firearms.

(photo Conquest Miniatures 500-009 Woodland Indians with bows)
I have found one pack of figures from Conquest Miniatures in their 500 Nations range and picked them up with the Artizan bondi through North Star but am struggling to find others. I did think about buying some musket armed figures and converting the non-firing poses to carrying bows and spears but according to the Conquest website the first two packs of woodland indians are now discontinued (and North Star is out of stock of all three). This means I'm going to have to do a fair bit of investigation to find enough figures so I might have to concentrate on raising the Norse and Welsh whilst hunt out the Algonquin...
Posted by Steve at 13:34 2 comments:

A quick browse of the Gripping Beast website shows that in their Age of Arthur range a number of really useful packs for the Welsh including teulu mounted on ponies and some useful bow armed peasants (just need a shoe adding). I think the majority of the Cymraeg will probably be coming from the Beast, though I need to make sure the teulu aren't too anachronistic.

Email ThisBlogThis!Share to TwitterShare to FacebookShare to Pinterest
Labels: Welsh

Whilst miniatures for the Vinlanders is quite straight forward (indeed an order for some Artizan bondi was despatched yesterday), the Welsh are a bit more problematical. Despite a list of wars between England and Wales as long as your arm there appears to be a dearth of Welsh miniatures for the twelfth and thriteenth centuries or information on their appearance.
Gerard of Wales is the best source and describes the Welsh army of the period as a prince's teulu, or personal war band, supported by a large number of milwyr traed, or foot soldiers. These Welsh infantrymen, armed with little more than spears and bows, were lightly equipped so as not to impede their agility (indeed it is stated that they only wore one shoe so to help their grip in the mountainous terrain). Cavalry, whilst armoured, was not of a comparable standard to the Anglo-Norman cavalry of the period.
Looking through my bookshelf I've found one illustration of a Welsh or Cornish infantryman in the WRG Armies of the Middle Ages and one of a Welsh Chieftain in the Osprey Scottish and Welsh Wars 1250-1400. The basic infantryman is in a rough knee length, bare-legged with cloak and one shoe (!), whilst the chieftain has scale armour, cloak, round shield and looks very Dark Ages. 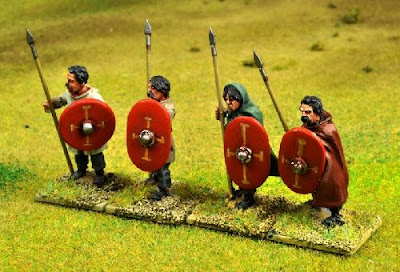 (photo Artizan Designs PAX003 Romano-British spearmen standing)
Miniatures wise I am going to try and hunt down some suitable looking Dark Ages Irish for the infantry, although I do like the Artizan Romano-British spearmen which might need a little bit of conversion but do look suitably Welsh. I'm not sure about command and cavalry, it'll probably be a case of going through the likes of Gripping Beast Dark Ages ranges and looking at Picts, Irish etc. to find suitable figures. Cavalry won't form a major part any warband bit a few pony mounted teulu would look nice.
Posted by Steve at 06:19 No comments:

Email ThisBlogThis!Share to TwitterShare to FacebookShare to Pinterest
Labels: Welsh

I've been scouring the 'net for suitable miniatures for New Worlde and have decided that as Mike was involved in the original idea that it was only fair that I use miniatures he has sculpted as far as is possible. Consequently I will be ordering some packs of Artizan vikings soon. 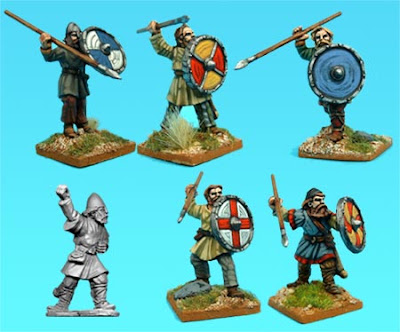 (photo Artizan Designs VIK002 Bondi spearmen)
As the level of the game will tend to focus on skirmishes and raids I'll be looking to create warbands of around twenty figures so a couple of packs of bondi and maybe a command pack should do for starters. I can't imagine that the Vinlanders would have much in the way of chain armour and the technology level of natives would generally preclude its regular use. That said for monster hunting and larger battles I would guess they would dust off the few precious pieces they have.
Given the Norse will have been in America for nearly two centuries at the time of the game I am also planning to add some local touches such as some odd feathers for decoration and maybe some Algonquin weapons...
Posted by Steve at 08:11 No comments:

Email ThisBlogThis!Share to TwitterShare to FacebookShare to Pinterest
Labels: Norse

That Christopher Columbus "discovered" America in 1492 is now recognised as being bunk by historians. It is widely accepted that almost 500 years earlier Vikings landed and built at least one settlement in Vinland (Newfoundland). There are other stories of the "discovery" of America before Columbus, by fishermen from Bristol in the 15th century, Irish monks in the 6th century and Welsh Prince Madoc in 1170... 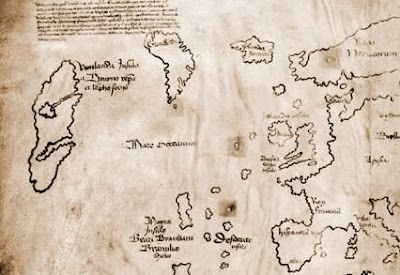 The legend of Madoc is interesting and inspired Mike Owen and myself (back in 1997) to discuss the possibility of using it as the basis of a set of wargames rules set in a mythical Medieval America with battles between the Welsh, the Norse (who had successfully settled on the Eastern seaboard) and the indigenous Algonquin tribes. The idea was further expanded by discussing the idea of including mythological peoples and creatures from the three groups.
Initially I did a lot of background work on the game (tying Madoc's journey in with an effort to save the Thirteen Treasures of Britain from the English) and Matthew Hartley wrote a draft set of skirmish level rules, but for one reason and another the idea progressed no further.
However, the concept is (I feel) a pretty interesting one, so in an effort to progress the idea further I've set up this blog to help develop the idea and who knows, maybe we'll see New Worlde published sometime in the future.
Posted by Steve at 07:14 No comments:

New Worlde is a blog exploring wargaming in a fantasy-medieval background set in twelfth century America, populated by the native Algonquin, Norse settlers from Vinland and the Welsh who landed with Prince Madoc in 1170. However, it is not just these three groups of people that fight for hegemony in the new world, but also the mythical peoples and creatures they believe in...